Hearthstone was released on the 11th of March, 2014 by Blizzard Gaming and has since then grown to become one of the most played and streamed games in all of esports. The game took the concept of the popular card game, Magic: The Gathering and moved it into the online sphere and it was an instant success that is now played all over the world.

Hearthstone betting, which is the phenomenon of betting on professional Hearthstone games, is by many considered a riskier form of esport betting compared to other games. This because regardless of how skilled the players may be (and you as a gambler), the element of chance and a lot of random factors will always affect the outcome of the games, more so than in other games. Despite this, it needs to be said that Hearthstone betting is not a game of guessing. On the contrary, it is about doing heavy amount of research by looking at streams to see what different decks the players are using and thus are expected to bring to tournaments, looking up past results and the players’ current form, to name some.

If you have a good understanding of the game and what type of decks the players are going to bring to tournaments you will give yourself a big advantage and often a big lead on the sportsbooks who usually aren’t quite as much up to speed. This lack of knowledge from the sportsbooks, combined with the mentioned element of chance often results in higher odds than usual and therefore a great dividend for the skilled Hearthstone better.

Apart from the above Hearthstone betting tips of looking closely at the professional players and scene, there are a couple of other things to study if you want to be on Hearthstone to increase your chance of winning.

What playstyle do the different players have?

To say that there are a lot of playstyles in Hearthstone would be to exaggerate. In fact, more players bring the same type of decks and play them all well, but there are often small differences to them, so called tech-choices, that can have a big impact on games.

There are however two playstyles that are easily distinguishable, aggressive (aggro), and controlling. Players usually master one of the styles and do not play as much of the other and depending on the Meta, one is usually stronger than the other. By understanding which type of deck is performing the best, you can pick a player that is known for playing these types of decks.

Wait a bit into a tournament before betting

Taking your time is something that can really pay off. Don’t get stressed and feel forced to bet on the first couple of games. Instead, look at the games and analyze the players and their decks to give yourself a better chance to make the right call.

There are several decks that counter each other and when a player might get drawn to play someone who counters his or her decks, it’s important that you still have some cash in your bankroll so you can bet on a sure thing.

Experience on the esport scene

Hearthstone (and Hearthstone betting) revolves around thinking and analyzing. As the famous but now retired player Lifecoach once said, “There is no reward for acting and playing fast”, when asked why he took so long to play, it is important to think and analyze every play.

This is often challenging for new players that aren’t used to huge tournaments with tens of thousands viewers and large price pools. A lot of games are not decided about how great decisions a player makes, but rather how few mistakes the same player does, and a moments lack of focus or a rushed decision can be devastating. That’s why it’s recommended for you to look at how experienced the player you want to bet on or against is and if the odds are good enough to take the chance, or if you should pass.

Keep yourself updated of the  Meta

Hearthstones Meta is a phrase that refers to what decks are currently strong and are played the most. If you don’t understand how the game is evolving and how it is played when you want to bet, you’re going to have a hard time betting on the right player.

The successful investor Warren Buffett once said that he doesn’t invest in anything he can’t understand and the same should be applied when betting – do not bet on something that you don’t understand!

In the four brief years that Hearthstone has existed, there have been a lot of tournaments. During 2016, 34 different tournaments were played with a comined prize pool of astounding $2,599,303. This also means that there are a lot of possibilities to bet on the game and below we have listed all the tournaments that were played during 2017 and will be played in 2018.

To find further information about the tournaments we recommend that you visit liquipedia.net.

To find the highest odds for Hearthstone, we recommend that you create an account at Arcanebet who is a major player in the esport betting niche and also offer betting on almost all tournaments.
If you want to know more about Arcanebet, we have reviewed the sportsbook thoroughly and looked at all the things that a serious sportsbook should fulfill. As in all cases with odds betting, the earlier you put down your bet, the higher the odds will be, but the risk is also higher.

How to play Hearthstone

Hearthstone is a turn-based card game where both players have 75 seconds per turn to play their cards and attack the opponent. The player who goes first starts with three cards (four since he gets to draw a card at the start of his turn). The player who goes second gets an extra card and also “The Coin” which provides the player with an extra mana crystal for one turn to help catch up and make the game fairer. Cards generally cost between 0-10 mana cystals to play and both players start with 0 mana crystals and get one at the start of their own turn.

There are nine classes in Hearthstone and difference between them is their hero power which costs 2 mana for all classes and all have different functions which can be seen in the picture below. Another thing that separates the classes is class cards, which can only be played by a specific class. These cards, along with the hero power forms the type of decks that each class can play and also created a fun and interesting dynamic with a lot of room for creativity. 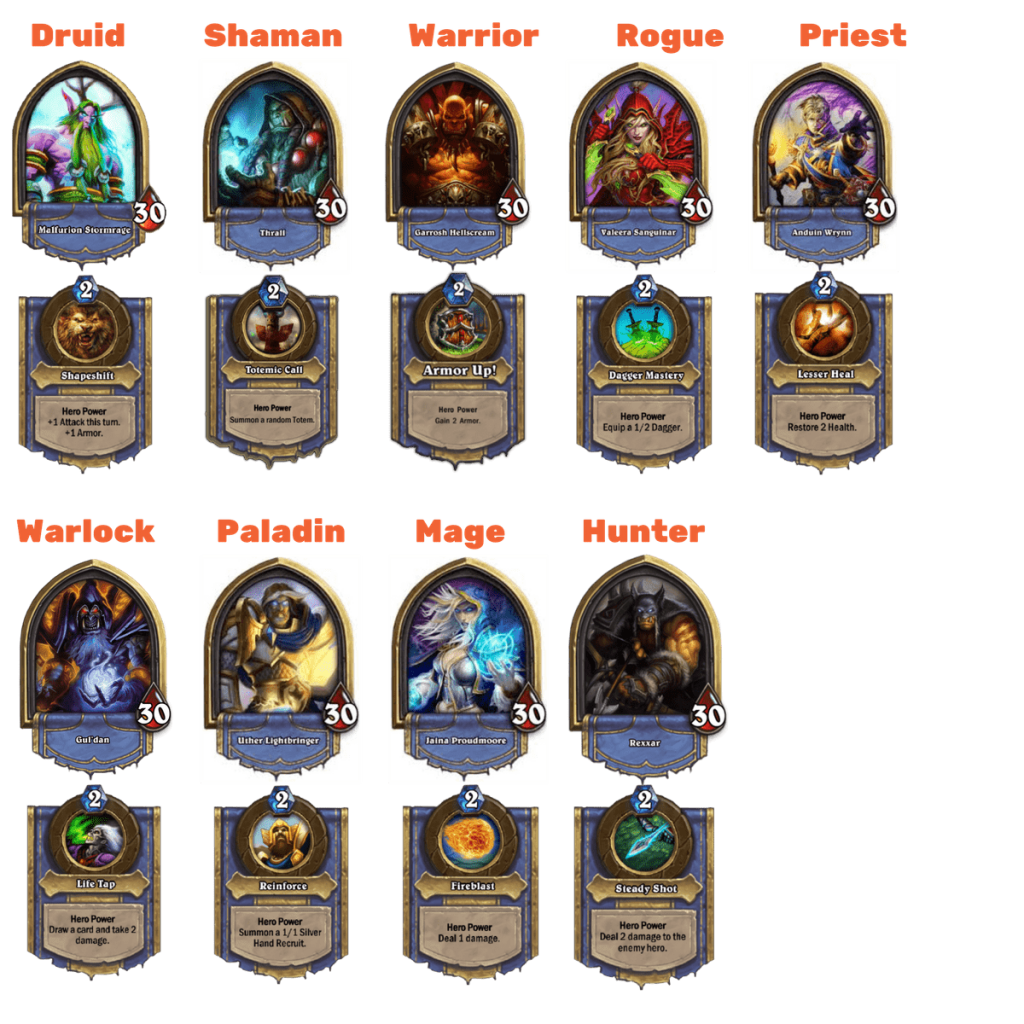 The two most common game modes in Hearthstone are “Constructed” and “Arena”. In the constructed game mode you create your own deck with cards that you have acquired and face players who have done the same. For every game you win, you get a star that helps you rank up, but for every game you lose, you lose a star. You start at level 25 and then you “rank downwards”, i.e. level 24 is better than 25. When you have reached level 1 and filled the bar of five stars, you advance to the highest tier which is called “Legendary” which you can’t get knocked out of. The ladder does however reset every month and which point everybody is stripped from their ranking and receive rewards based on how well they performed.

To play in the arena costs gold that you acquire from winning games, either versus the computer or other players. In the arena you pick between the randomly chosen classes and get to assemble your deck, card by card and you always choose from three randomly generated cards. When you have picked 30, you can start playing against other players. 12 wins is the most possible at which point you get the most, and best rewards, but if you lose three times, regardless of how many wins you have, you’re out and have to pay to create a new deck and re-enter the arena. The reward you get is relative to the amount of wins you got. I.e. if you only win 1 game the reward will be very low, and as mentioned, if you win 12 games, you get a hefty reward. Playing arena is a great way to learn the game and to collect cards.

Regardless of which of the game mode you play in Hearthstone, we here at Fragbetting are sure that you will love the game and playing the game is excellent preparation for betting on it. Good luck!